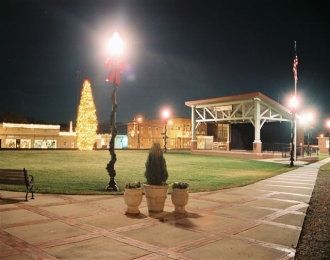 The location of Depot Park, on the grounds of the Railroad House and the old railroad depot, was a natural choice. Once the hub of Sanford economic activity, this area of downtown had been neglected for many years; as a result, the DSI Board felt that a park located in this area could bring downtown an economic engine of its past. In 1997, through the joint vision of the City of Sanford and DSI, the concept of Depot Park was born. The Railroad House, the Railroad Depot, and most importantly, the surrounding land presented a unique opportunity to create a space where people could come together downtown to meet, to play, and enjoy themselves for the day.

Phase I of Depot Park was completed late in the summer of 2001. This portion of the park includes a brick bandstand, a lawn seating area that accommodates approximately 750+ people, brick-banded sidewalks, decorative lighting, ornamental fencing, and benches. Phase II of Depot Park was completed in the spring 2005. Components of Phase II include an interactive splash fountain with a large landscaped open area surrounding it, public restrooms designed to conform architecturally with the rest of the park, continuation of the ornamental fencing, an information kiosk, decorative lighting, a landscaped parking area, and streetscape along Carthage St. bordering the park. Phase II also made improvements to an existing play area which houses a historic locomotive popular with children of all ages and the Railroad House, the only historical museum of Lee County.

Today, Depot Park is a true urban park representing the cultural, communal, and economic center of downtown. The park serves as a gathering place for both scheduled events (concerts, patriotic rallies, etc.) and leisure activities. Many times during the day, people can be found in the park eating lunch, playing in the fountain, or reading a book. With the incorporation of the Railroad House Museum housed in the Sanford Railroad House, historical education is also an important component of the park.

The park draws over 50,000 visitors a year, many of whom will spend dollars at the businesses bordering the park. No single element has benefited the most from the Park than the business expansion that has occurred with the properties bordering the park, including an antique store, three restaurants, and several office spaces. Many business owners have said that the new Park played a major role in their location decision. The construction of Depot Park is a significant beginning to inviting people to the downtown area for a variety of purposes. Over 130 years later, the location is once again a cornerstone for downtown and the city.

We is still accepting $40 donations for inscribed brick that are placed in the park. In order to make a contribution, please call (919)-777-2100 for a donation form. If you want to make a larger contribution, we have other items in the park that need donations as well, including benches, a fountain, and an ornamental clock.