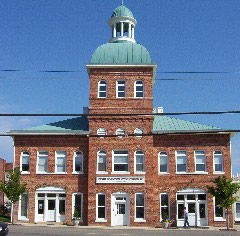 The Historic Sanford Downtown Walking Tour was produced under the direction of Downtown Sanford, Inc. and the Travel & Tourism Committee of the Sanford Area Chamber of Commerce.  Use the map

1. OLD CITY HALL 143 Charlotte Avenue
Built by local contractor Joe W. Stout using bricks supplied by Goldston Brick Company, the building was begun in 1909 and completed in 1910. In addition to providing meeting space for official town business, the upstairs assembly hall provided meeting space for various groups. The municipal building also served as home to Sanford’s volunteer fire department. The front elevation is dominated by a three story stair tower with circular windows, corbeling, belt courses, a dome like rood, and a circular lantern supported by round columns set against arcading. Other features include a metal sheathed hip roof with a reticulated balustrade, segmental arched and square headed window and door openings. A one story brick wing was added in 1950. The steel front once had arched fire wagon doors; these have been filled in.

2. COCA-COLA BUILDING 131 Charlotte Avenue c. 1908
A bottling works structure was shown at this site on the 1908 Sanborn Maps. It appears that the early building was remodeled to the current appearance during the 1920s. the property consists of two structures. The one story brick building is simple in design and detail with a corbeled and sawtooth brick cornice and second band of corbeling above the shopfront. The shopfront consists of two large windows with transoms flanking an entrance with a transome and sidelight. The adjacent structure has a blond brick façade and molded terra cotta surrounds framing the windows and doors. Above the second floor windows are terra cotta panels with stepped sides, three containing Coca-Cola bottles in relief and the larger fourth one containing the Coca-Cola logo. The cornice features molded terra cotta with sawtooth openings framing tiny Coco-Cola bottles. These terra cotta geometric designs are beige, brown, green, and yellow, reflecting the building trends of the 1920s.

3. CAROLINA HOTEL 100-104 Carthage Street 1930
This four story dominates this portion of the district. The structure has evenly proportioned paired windows between each bay on all floors above the first floor. At the center of the second story is a large sweeping arch framing a French door that opens onto a brick and wrought iron balcony. On both sides of this center arch is a triple arch of brick headers with a griffin motif in the center arch. Other arches wrapping the building at the first floor elevation have various motifs, such as quatrefoils, diamonds, and crosses. 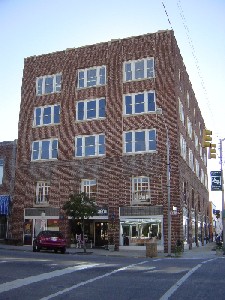 4. TEMPLE THEATER 120 Carthage Street c. 1925
For several decades after its grand opening on March 2, 1925, the Temple served the area as a grand cinema and vaudeville house. The theatre closed in the 1960s, but it was remodeled and reopened in the 1980s and today serves as Lee County’s premier playhouse. Designed by Henderson architect Eric G. Flanagan and constructed by the Joe W. Stout Company of Sanford, the Temple is an eclectic blend of Classical elements. Representative of theaters built across the country during the 1920s, it has a two story façade of buff colored brick trimmed in white molded terra cotta. A variety of decorative brickwork , modillion cornice, a central panel with swag motif, and reticulated grilles over the two openings flanking the central panel adorn the exterior. The interior features stenciled plaster walls in floral and urn patterns and a pressed metal ceiling.

8. MAKEPEACE BUILDING 101-115 South Steele Street 1924
The Makepeace family has been important to the industrial and commercial life of Sanford for many years, having opened the Sanford Sash and Blind Company prior to 1890. The façade of this two story brick commercial building has a narrow cent4ral bay flanked by two bays on each side. Each bay is composed of two sets of paired windows. The bays are separated by brick pilasters capped by simple classical capitals. At the cornice, the bay divisions are marked by blond brick laid in rectangles; stone spheres on plinths mark bay divisions at the roofline. The central bay contains an entrance for the second floor offices and features a pediment at the roofline. Below the pediment is a terra cotta panel bearing the name “Makepeace” and the date “1924.” 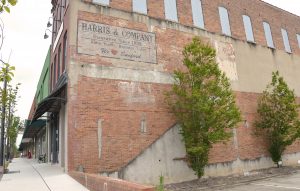 10. STROUD-HUBBARD SHOE STORE 112 South Steele Street 1928
In 1910, E.B. Stroud and A. M. Hubbard joined forces as the Stroud & Hubbard shoe store. In 1928, they employed L.M. Thompson to design and Joe W. Stout to build the two story brick store on Steele Street. the façade is a playful combination of Gothic and Tudor architecture. Architectural details are done in terra-cotta; slender lancet arched recess in piers flank the facode. Five heavy mullioned windows are grouped under a single label molding, and the quatrefoils and shields in the panel under the parapet. The display windows have copper mullions and the low wall under them is capped by a row of blue and white terra-cotta rosettes. Inside, the store features, pressed metal ceilings, wooden shelves and counters, a mezzanine, and a dumbwaiter (bearing L. M Thompson’s signature) for lifting merchandise from the basement to the upper story.

11. WILRIK HOTEL 204 Wicker Street 1925
The tallest structure in the district, this six story building displays restrained ornamentation, relying on mass to dominate the area. The façade of the first and second floors is covered with granite and capped with a molded cornice. The upper four stories are of brick, with the fifth and sixth floors divided by a horizontal stone band. Above the sixth floor a green tile skirt roof is supported by brackets with diamond shaped stones between each bracket. Tripartite windows in arched openings mark the second floor, while those on the upper floors are paired one over one sash with concrete sills and soldier course lintels. Even though the upper floors have been renovated, the egg and dart molding has been retained in the foyers and hallways of the public areas.

12. BOWERS BUILDING 209 South Steele Street-137 Wicker Street 1925
This two story, blond brick commercial structure originally housed the U.S. Post Office. The Steele Street elevation consists of five bays separated by brick pilasters. With the exception of the two southernmost first floor bays, each area between each pilaster is marked by three windows on each floor. The Wicker Street elevation has three central bays flanked by narrow bays with entrances to the second floor. The central bays consist of display windows flanking a recessed entrance on the first floor and triple windows of three over one sash. The three bays are separated by pilasters which rise to classical capitals. Each bay is topped by a molded terra cotta band with egg and dart molding. Above the Wicker Street entrance is a panel decorated with a scrolled shield.

16. PASSENGER DEPOT Carthage Street between Moore & Chatham Streets, southwest of the Railroad House. c. 1910
A typical one story brick railroad depot with wide overhanging red tile roof with flared eaves Supported by large wooden brackets with onion-shaped pendants. Small projecting gables mark the ends of the building while a central gable with palladian window marks the façade. Three paneled chimneys rise at regular intervals through the roof ridge. The building was renovated in 1976 for use as the Lee County Senior Citizen Center. It now houses the Sanford Area Board of Realtors.

17. RAILROAD HOUSE 110 Carthage Street. c. 1872
A one and one-half story board and batten Gothic Revival cottage built for the first depot agent for the Raleigh and Augusta Railroad line in the new community of Sanford. Cross bracing and finial ornament the gables of the main roof, the two from dormers, and the entrance bay porch. The latter is supported by square posts with raised panels. A paneled and crenellated chimney rises at the center of the main block, while a massive crenellated chimney rises on the exterior of the end of the rear ell. The house was moved to its present location in 1962 and converted for use as the offices of the Sanford-Lee County Chamber of Commerce. It now serves as a museum containing hundreds of interesting artifacts.

As a Main Street America™ Accredited program, Downtown Sanford, Inc. is a recognized leading program among the national network of more than 1,200 neighborhoods and communities who share both a commitment to creating high-quality places and to building stronger communities through preservation-based economic development. All Main Street America™ Accredited programs meet a set of National Accreditation Standards of Performance as outlined by the National Main Street Center.